Cardiff Metropolitan University formerly known as Cardiff Polytechnic may not be a seat of learning on a par with Oxford, Cambridge, Heidelberg, The Sorbonne or Princeton but when it comes to politically correct idiocy it is at the right up there with Harvard, Uppsala, University of California or The London school of Economics. The University has banned lecturers from using any sexist or insensitive words, lest they should ‘trigger’ Cardiff’s special snowflake’ students to an emotional crisis. The list of banned words is more far reaching than you might think. Here are few examples (source: Zero Hedge)

And please, try to avoid words like “mother” and “father” unless you can say “mother and father” together. Yes, the article states that.

Gee, is there an order for this? Yes, there is. It better be random. Always saying mother first could get you in trouble. The article did not say but the phrase “ladies and gentlemen” clearly has to go. 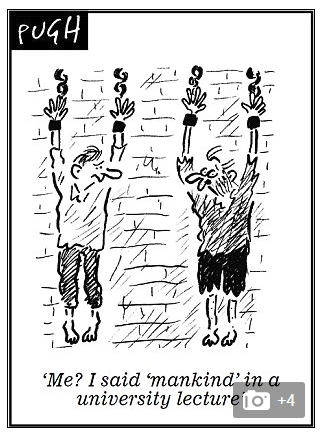 According to the guide, Mrs. and Miss are considered offensive. Clearly, it’s best to avoid gender-identifying terms altogether.

What happens When these culturally-trained “snowflakes” hit the real world outside of their safe-space university?

Hmm. Am I allowed to use the word “snowflake” like that? Apologies offered for my unsportspersonslike conduct.

The limitation on language is a TOOL of OPPRESSION, by the elite against white people. Because if you can’t use the words you naturally would use then your mind adapts, and not in a good way. Why do you think the Jews, blacks and Muslims in our legal systems are in favour of HATE SPEECH laws?

Patrick Stewart applying for US citizenship to ‘fight’ President Trump

As we have noted, democracy was the plausible and, to the anaesthetised British people, morally unanswerable ideal whereby the destruction of British Africa was initially engineered. Yet the failure of this near-insane liberal experiment has in no way given pause to the systematic — or rather, precipitate — hand-over of power to the black inhabitants, no matter how incompetent, corrupt, blood-splattered and Marxist they might be. It is thus impossible to avoid the conclusion that this democratic idealism was never more than a cover for something entirely different but much more to the political point – namely the subjugation of the civilised white man.

It seems to be impossible to get people in Britain and America to realise that the capitulation of the West is due entirely to pressures exerted from within, not to pressures exerted from without. There is nothing ‘inevitable’ about it as we are taught to repeat. The ‘march of events’ is being paced out to the tune of Western ‘fiddlers’.
White Man Think Again! by Anthony Jacob, Johannesburg 1965

Is not our role to stand for the one thing which means our own salvation here but with which it will also be possible to save the world, and with which Europe will be able to save itself, namely the preservation of the white man and his state? Hendrik Verwoerd

I question the morality of forced assimilation or absorption of peoples. If we were to apply that principle of assimilation as it were the only moral solution for our problems, what would happen to the white man whose heritage this South Africa is, settled by his forefathers, built by them throughout three centuries and more, a home for its people, drenched with their sweat and blood of these three centuries?
Dr Hendrik Verwoerd

What are we in South Africa going to do in that future? My answer is that this will depend on the question of whether we will be able to maintain our anchors. For me this means that we should keep our identity as a people, that we should not become international, that we should not consider ourselves wise or learned or big when we abandon our people. But secondly – and this is the most important – this anchor must ensure that we keep our faith. If we can stay anchored in our faith and thus in our Church, those big changes can do nothing that spells danger to us as a people who hold fast to God and his Word.