While mainstream media was hailing the political mastery of Hausfrau – Volksfuhrer Merkel in negotiationg a new coalition deal to keep her in power for another four years, after Germany had been without a government for almost six months, The Daily Stirrer (and other alt_news sites to be fair) warned that the new government of Europe’s most powwerful economy was fragile and full of holes. Only days after Merkel was sworn in for a fourth term, the holes in her coalition started to appear. Germany’s new Interior Minister Horst Seehofer of the CSU party, a well-known and strident critic of The Chancellor open-door policy toward migrants, recently said that Islam is not part of German culture. 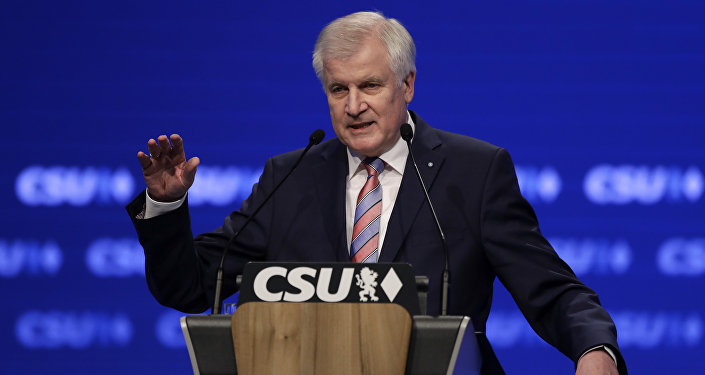 Similar statements have been repeatedly made by the Alternative for Germany party which opposes mass immigration and is Eurosceptic. This is in constrast to the sentiments of Merkel and some of her more sycophantic hechmen, who have repeatedly stated, to the detriment of their own paty’s standing, that Islam is as muvh a German religion as Christianity.

Seehofer, leader of the Christian Democratic Union (CDU), on whose support Merkel relies, publicly opposed the idea that the Islam is part of German culture. “No. Islam does not belong to Germany,” Seehofer said in an interview with the German newspaper Das Bild. “Germany has been shaped by Christianity.”

In particular, the politician stressed that some aspects of German everyday life have been prompted by Christian traditions. This includes, for example, that all supermarkets and stores are closed on Sundays and that many public holidays coincide with church holidays such as Easter and Christmas.

Although the politician told the media source that Muslims are a part of Germany, he stressed that the country won’t abandon its centuries-long beliefs and national traditions.

The “Islam doesn’t belong to Germany” remark was used by the AfD party in their general election campaign last year. The right-wing party which is now the third-largest bloc in the Bundestag and the country’s largest opposition party is known for its tough stance on migration.

Seehofer also said that he was working on a “master plan” to speed up deportations of migrants whose asylum applications had been rejected. In 2015, Merkel announced that Germany would open its borders to migrants, fleeing to Europe in the hundreds of thousands in search of a safer future.

However, of late Berlin has been trying to curb its open migration policy, partly, in a bid to balance out the relationship between the CDU and the CSU which wants to see a harder line on immigration, after Merkel’s party took a Major hit in the election, losing so much support that Merkel had to ally with traditional opponents to stay in power.

Germany: Is Bavaria set for an anti-Merkel conservative swing?

German Election: Will Another Term For Merkel destroy German Economy

According to the latest round of opinion polling ahead of the German elections, Angela Merkel looks set to become the joint longest-serving modern German chancellor, that’s despite having been accused of “putting problems on the back burner, and staved off several attempts to indict her on treason charges for her role in the immigrant crisis. Business organisations have also raised doubts about the economic consequences of re-electing her, warning that her new term may bring “stagnation” for Germany.

Majority of Germans Favour Snap Election as Merkel Coalition Talks Stumble
There appears to be no end in sight to Germany’s crisis of democracy as the European Union’s most populous and economically powerful state continues to stumble along without an effective government. Coalition talks between Chancellor Merkel’s CDU/CSU and the left wing Greens and classical liberal Free Domocrats have stalled over irreconcilable policy demands.

Chechen Islamic Police Now Enforcing Sharia Law On Streets Of Berlin
A hundred Islamists are now openly enforcing Sharia law on the streets of Berlin, according to German police officers who are investigating a recent string of violent assaults in the German capital. The self-appointed religious police consist entirely of Salafists (Muslim fundmentalists) from Chechnya, a predominantly Sunni Muslim region in the Caucasus. The vigilantes are name-and-shame tactics and physical violence to intimidate Chechen migrants and dissuade them from integrating into German society;

Is USA Preparing For War Against Russia In The Baltic Region?
The US government has been making preparations for a possible war against Russia in Europe’s Baltic States, German business newspaper Deutsche Wirtschafts Nachrichten (DWN) reports (link goes to page in original German). The report claims that all the NATO war games organized in the region by Washington have been intended to prepare various military response scenarios.

U.S. To Station Nuclear Weapons in Germany Against Russia
Germany’s ZDF public television network reported on September 22nd, “New U.S. Atomic Weapons to Be Stationed in Germany,” that the U.S. will station 20 new nuclear bombs in Germany, each being four times the destructive power of the one that was used on Hiroshima . Hans Kristensen, the Director of the Nuclear Information Project at the Federation of American Scientists, says, “With the new bombs the boundaries blur between tactical and strategic nuclear weapons.”

Watershed Moment In US – EU Relations, Merkel Says Europe Can No Longer Rely On America
Only hours after Donald Trump infuriated Angela Merkel and the rest of his G-7 peers by refusing to endorse the Paris climate treaty, the US President has done it again. Hausfrau Volksfuhrer Merkel has now decided Europe can no longer rely on the USA to commit military support to EU nations that do not pay their NATO subs, should they come under attack.

Brexit: Is Germany Dictating to Britain How We Will Trade With The World After-Brexit?
Germany offering Britain post-BREXIT access to the European market for an annual “fee”! Who do these sausage scoffers think they are? The German government might like to pretend otherwise but there are twenty six other EU member states involved in negotiating any post – Brexit trade agreement with the UK, and Germany is not overly popular with many of them.

Left Wing Hate Mob Protesting At G20 Turn Hamburg Into An Inferno.
Militant anarchists staged a second day of violent protests in Hamburg as the G20 summit in the city held its first sessions. According to local reports, at least 45 people have been detained and 159 police officers have been wounded in clashes. For the second day, police had to resort to water cannon to disperse protesters from various neo – fascist groups (OK, we know they call themselves anti – fascist but the pathetic little university dumbed down idiots do not understand was fascism is,) while buildings and dozens of cars were set on fire in the suburb of Altona.

EU Euronazis Raise Demand For Brexit ‘Compo’ To €100 Billion.
Tensions between the UK and Europe escalated overnight after EU negotiators increased their demand for compensation from Britain’s for the anticipated effects of Brexit to €100 billion, (You can imagine Juncker and Barnier, dressed in Mao suits, sticking little fingers in the corner of their mouth and in silly voices intoning “One – hundred – billion – Euros.) This latest attempt to bully Britain has only served to widen the divide between Brussels and London.

Non Germans now outnumber Germans in the city of Frankfurt, for the first time in a German city more than half of Frankfurt residents now have a migrant background, according to data from the city’s Office of Statistics and Elections.
Figures show that 51.2 per cent of people living in Frankfurt have a migrant background, the city’s secretary of integration Sylvia Weber said: Well that sounds like a recipe for conflict.

French Prime Minister says: “Europe Is Falling Apart”
After years of blythely ignoring years of economic stagnation, social deterioration, and an unemployment rate which stubbornly refuses to fall below double-digits for countries like Greece, Spain and Italy, Europe appears to have finally been shocked into recognising the reality of its situation by Brexit and the Trump election in the USA. Bureaucrats have responded with their usual tactic, scaremongering.

Somali Rapist Was Not Deported: Rapes Again.
As she campaigns to be elected leader of The Conservative Party and thus Prime Minister, Theresa May glibly promises to be firm in maintaining law and order and to address the problems caused by mass immigration by reforming immigration laws and enforcing border controls. But can she be trusted?

Is Bilderberg A Sinister Group That Runs The World Or Just A Tea Party For Rich And Powerful People
Are the Bilderberg Group meeting, this weekend in Dresden, Germany, really The Shadow Government (the New World Order, The Illuminati,) that rules the world? For years the Bilderberg Group denied its own existence. Now thanks to the diligent work of dedicated investigative journalists we know it is real, yet many ‘liberals’ ‘progressives’, globalists and university dumbed down idiots still insist it is all a conspiracy theory.

BoJo Was Correct – The EU Was A Nazi Idea
The biggest kerfuffle in the EU referedum campaign this week came when the University dumbed Down and brain dead, Labour voting sheeple got their knickers in a twist over comments Boris Johnson made about the E U having originally been a Nazi idea. Boris was accused of misrepresenting or exaggerating the comparison between the EU and the German Nazi’s plan for a union of Europe.

Will Merkel’s Migrant Disaster Drive Germany’s AfD Into Power?
Results from local elections held in Germany last weekend indicate that German Chancellor Angela Merkel is in deep trouble. Her party, the Christian Democrats is losing votes to opponents from the right and left, largely because of the illegal immigrant crisis brought on by Merkel’s crazy ‘open doors’ immigration policy which ahas resulted in Germany admitting criminals, terrorists and many illiterates,