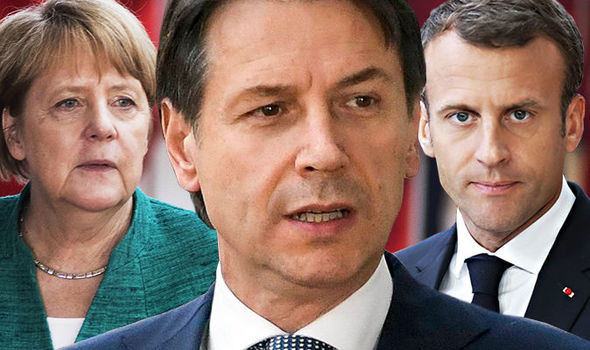 A Senior EU official has confirmed Rome is behind the stalled talks in the Belgian capital after a press conference, featuring Jean-Claude Juncker, Donald Tusk and Bulgarian Prime Minister Boyko Borissov.

Express.co.uk has learned Italian Prime Minister Giuseppe Conte has blocked all of the summit conclusions – not just those on migration, which has not even been discussed by leaders of the EU28.

The last time a European Council summit ended with no agreed conclusions was March 2017, which means leaders could be stuck in meetings until the early hours as they struggle to reach an agreement.

An EU diplomat said Rome is “putting a knife on the member states throat” over migration even before the subject is discussed by heads of state.

Italy’s populist government had previously threatened to veto the joint EU statement on migration as German Chancellor Angela Merkel fights to find a European-level solution to avoid a domestic crisis on the issue. The month-old government in Rome argued the words put on the paper were insufficient to address what could become a fresh migration crisis to replicate the summer of 2015.