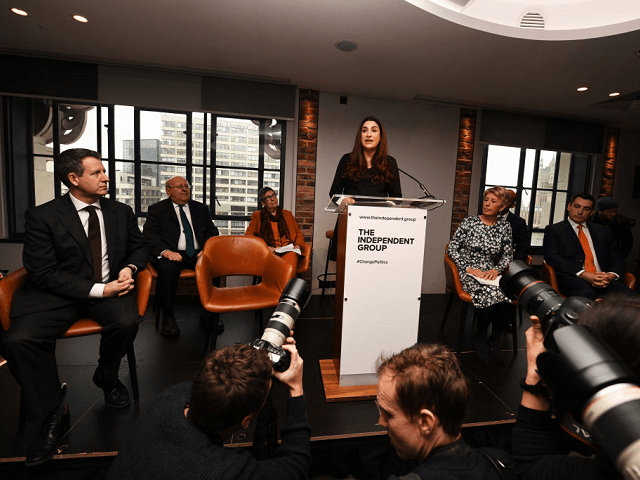 As has been predicted for a while now, by both mainstream media and alt_news commentators, the UK’s far left Labour Party which has been torn by internecine conflict since current leader Jeremy Corbyn, the long serving Trotskyite Member of Parliament for one of London’s most fashionable inner city communities, became its leader. Labour, which once styled itself The People’s Party is now the rich, trendy, virtue signalling party. And with its core support among immigrant communities and university brainwashed media professionals, it has little need to concern itself with the white working class, many of whom will always vote Labour for the welfare benefits, while others continue to vote for the party because their fathers and grandfathers did.

When seven Members of Parliament (MPs) announced their resignation today, not only did they come from a broad political spectrum within the party and a wide age range, they all cited the party’s anti – Semitism under Corbyn’s leadership as their main reason for leaving. They are: 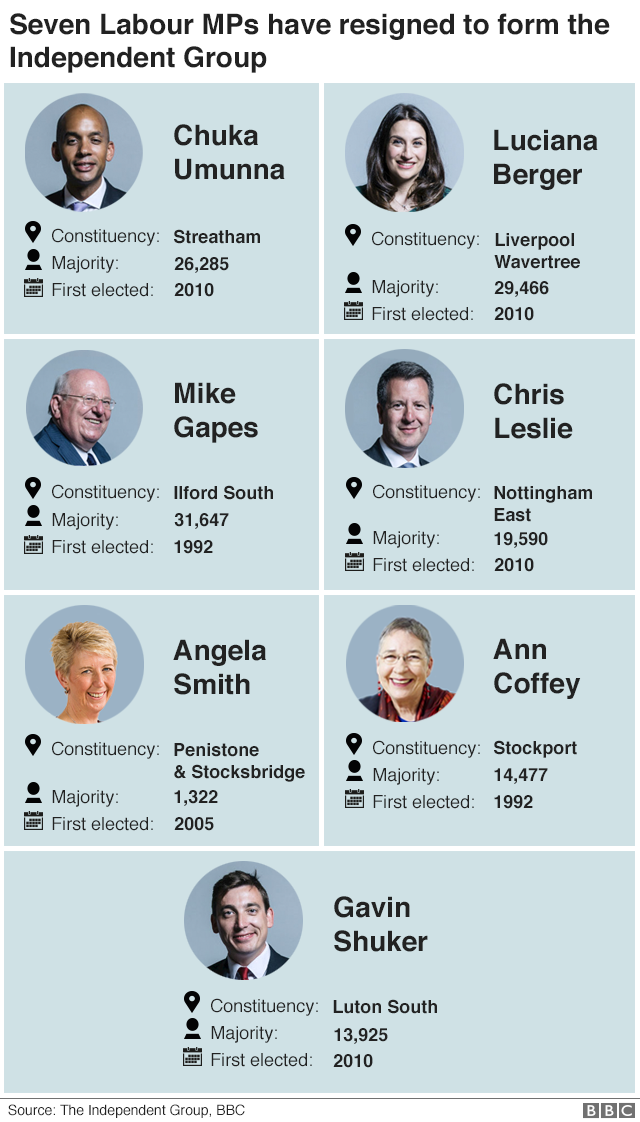 The prominent role taken buy Ummuna in the breakaway suggests this group are a Blairite, globalist faction and even further removed from the party’s working class gras roots than Corbyn’s far left, intellectual supporters.

Stephen Kinnock MP, son of the former Labour leader Neil Kinnock, had predicted that there would “probably be some kind of splintering” over the weekend, when he urged the rebels to “stay in and fight” to take the party back from the extreme left Momentum group unleashed by Stalinist deputy leaders John McDonnell. which has become the source of most anti – Semitism within the Labour movement?

But how and when did the party that were it honest would call itself “The Jew – hating Labour Party,” become anti – Semitic? How is partly the lurch to the left under Corbyn, with his supporters being formerly on the side of victim-state Palestine in their low key war with capitalist Israel, ‘when’ is quite recently it seems.

Jewish Labour MP Luciana Berger, explaining her decision to leave Labour at a press conference this morning, said she was “embarrassed and ashamed” by the party that was once known for its Jewish roots in Britain’s major cities. She has frequently spoken out about the abuse she has received from fellow Labour members in recent years, challenged Corbyn on his alleged anti-Semitism problem, and even had a bodyguard at last year’s Labour conference.

Also speaking at the launch of the new ‘Independent Group’ of ‘centrist’ (i.e. Europhile,) Members of Parliament who have, after much speculation, finally launched a break away from the Labour Party. Chukka Umunna has complained of a “broken” politics with parties that can’t represent the key political factors of the day. It is clear that Umunna is one of the leading figures behind this new party that isn’t yet a party, so it is worth looking at his comments to get a feel for where the group will position itself on the political spectrum, beyond the anti – Semitism headlines, Brexit and the crime wave in Sadiq Khan’s London.

The big issue behind Umunna’s comments is a clear feeling that Britain’s politics is “broken” — his colleagues in the group also spoke of voters feeling “politically homeless”. In fact he has taken the wromg path by choosing the globalist route, Labour’s traditional voters in the old industrial areas of Britain are abandoning Labour because they feel the party has abandoned its working clas supporters, and here is Ummuna,talking to billionaires and corporate investors, rather than the people whose votes he needs.

Following the schism, Dr Moshe Kantor, the President of the European Jewish Congress, spoke out to further highlight Labour’s anti-Semitism problem, calling on Corbyn himself to act to stamp out the hate within his party.

In the furore over verteran Member of Parliament Frank Field’s resignation from the Parliamentary Labour Party, John Mann, Labour MP for Bassetlaw and Brexit supporter backed up Field’s claim of thuggish behaviour by far left extremists who have hijacked the party since jeremy Corbyn became leader. Mr. Mann told reporters that he had been subject …

On encountering my insense dislike of the Labour Party, people asume I am a Conservative. WRONG! I have never supported The Conservatives and have never voted either Conservative or Labour in my life. Politicians should never be trusted, I but what sets Labour politicians and activists above the rest in terms of being worthy of only contempt is the hypocrisy.

Picture: Breitbart London Another day, another round of Labour infighting over claims of rampant anti-Semitism, racism and bigotry in the left-wing UK Party. MP Ian Austin is now facing action after he allegedly said Labour had become a “sewer” under the leadership of Jeremy Corbyn. The claim came during a heated debate about the hatred …

Once We Respected Red Cross Because The Did Good Work. Now They Promote Politically Correct Tyranny.

The cancer of politically correct thinking has spread throughout British public life. Probably the most perfect illustration of how out of touch the new elite, the Meritocracy (who only merit a kick up the arse) have become with the lives of ordinary people is the politicisation of the institutions of government, local government, education, the law and now even the charity sector. Read what happened to a charity worker who dared to have his own opinion on a gay rights issue

With two and a half months still to go until polling day, the election campaign is well and truly underway. Ed Miliband kicked off Labour’s effort with what could turn out to be his bigotgate monent, as he stopped only a nanometer short of telling an aircraft electrician that ordinary people were not intelligent enough to understand politics and should stick to talking about the soaps.

The Labour Party deputy leader, Little Hattie Harperson, the paedophiles friend, cannot to anything right at the moment. Hattie has of course always been an electoral liability on a par with the racist posh boy Chukka Ummuna, a hot tip to replace Ed (Bacon Sandwich Man) Miliband until Chukka, in a rare moment of honesty said he believed all white people should be killed (or something like that)…

When a traditionally left wing publication like The New Statesman turns on The Labour leader you can be sure the party is in bigger trouble than anyone involved with it is ever going to admit. This blog has been saying for years Labour is now more elitist than The Conservatives, the party of lawyers, academics and media luvvies. …

Game of Groans: David Cameron and Ed Miliband will be torn apart as the election nears

Will Dave or Ed be Prime Minister after the 2015 general election or will a sicteenth centry witch fould up the best lain schemes of mice and men. 2015 could turn out to be the Demdike Man election, not through macick, but metaphor. The Witch of Pendle representas a communitity and culture that has been abandoned by the self righteous, politically correct concensus politics of the bourgeois establishment. Are the working and middle classes about to strike back.

Police chiefs blocked a paedophile probe into a top politician 25 years ago, one of the country’s most senior officers said yesterday. Derbyshire Chief Constable Mick Creedon was serving as a detective sergeant in Leicestershire when allegations surfaced against Labour MP Greville Janner in 1989. Mr Creedon said he was ordered to limit his inquiries into the MP, now Lord Janner of Braunstone.

Labour leader Ed Miliband’s keynote speech at the Labour Party conference woyuld have to be the best speech of his life if he hoped to be Prime Minister after next years election, the consensus of opinon said. Ed’s friends and opponents awaited the speech with very different hopes and expectations. in the end as Ed dodged the bg issues, the economy and debt, law and order, immigration and Europe, it was probably his enemies who were happier.

What immigration has been to the Conservative so the Child Sex Cover Up scandal is proving to be for Labour as the party gets set to tear itself apart. With similar scandals due to be exposed in Rochdale, Bradfor, Oxford and other big towns, the Rotherham case is gathering momentum. So indirectly it looks as if immigration and fear of being called racist will be the downfall of both major parties.

The politicians may run a mile when the topic is mentioned, the Islington Screechers and medi luvvies may cover their ears and go la-la-la-la whenever the topic comes up but there is no denying immigration is the big issue in Britain today. Labour’s open doors immigration policy was a disaster, the coalition have failed to address it for fear of upsetting the politically correct thought police. Is it any wonder UKIP, the only party that will talk about immigration, is doing so well?

After weeks of mounting pressure and in the wake of resignations by council political leaders and senior exectutives and also of the recently elected Police Crime Commissioner for the scandal hit town, Joyce Thacker the head of children’s services at Rotherham council has finally quit. Following the revelation of a massive cover up by elected representative, police and care professionals who went to considerable lengths to avoid acting on allegations of organised sex abuse gangs consisting mostly of

After scream of ‘racists’ and ‘bigots’ from the left when common sense users pointed out that mass immigration does not benefit the economy, nor is it fair to the people shiioped here having been promised a utopian existence only to find they are living in foul conditions, doing menial jobs, and being paid under minimum wage and exploited by unscrupulous bosses.
, a report by civil servants confirms that the ‘right wing extremists’ was absolutely correct.

Ve Haff Vay Of Making You Konform. The Tide Is Turning against the Autoritarian Left

The left’s self confidence has had a hint of desperation about it for a long time. From their constant whines about the sexism, racism and homophobia of the working class who happen to be the party’s core constituency to the substitution of smearing UKIP for policies in the european Election this is a party of arrested adolescents throwing a hissy fit because people are laughing at them.

Immigration was the subject of the big debate at UKIP’s conference in doncaster today. With the Rotherham paedophile scandal which involved Muslim men in the immigrant community abusing young white girls as open sore in South Yorkshire politics at the moment the topic was long overdue for serious debate. One of the reasons the Rotherham scandal happened was the politically correct left scremed racism whenever issue was raised. Immigrants are not above the law.

Labour’s racist left comes out of the closet</a