After six months of street protests against the government of President Emmanuel Macron, the anger of the French people showed no sign of abating this may day holiday as tens of thousands of protesters took to the streets of Paris and other French cities on to mark International Workers’ Day (also known as Labuor Day). Following the pattern of the ‘Yellow Vests’ protests, nobody expected todays efforts to be peaceful  and it was inevitable protestors would  clash with French riot police.

The demonstrators included Yellow Vests, trade unionists, climate change protesters and Black Bloc (antifa) – which posted on social media that they wanted an “Armageddon” rally that would turn Paris into the “Riot Capital of Europe,” according to a report in  The Daily Mail reported today. 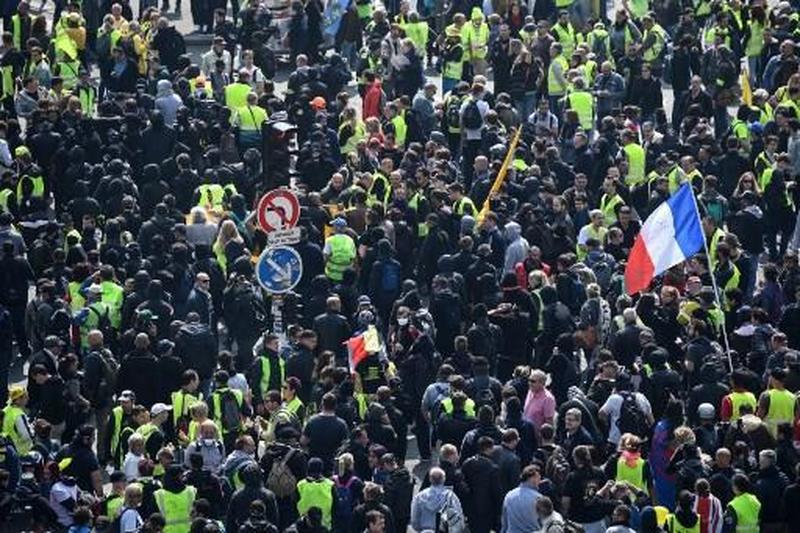 More than 7,400 police, gendarmes and soldiers were on duty to quell the more violent protesters. Interior Minister Christophe Castaner said “‘There’s no question of dramatising anything, it is a question of being prepared,” adding that “1,000 to 2,000 extremists” were expected to take part in the protests.

Paris police said in the afternoon that 250 people had been arrested, most for public order offences related to the rioting, as cops clashed with ‘Black Bloc’ anti-capitalists. The Sun reported large areas of Paris are on lockdown as an unprecedented 7,400 police officers have been drafted onto the streets.

More May Day riots are expected in the French capital today, tomorrow and through the weekend following the months of chaos caused by ‘Yellow Vest’ protesters. The massive security presence on the streets of French cities was announced by Interior Minister Christophe Castaner. May Day is a Bank Holiday and a traditional time for Left-Wing workers to rise up against the ruling elite echoing the May Day revolution that led to the collapse of the Russian Empire and the formation of The Soviet Union.

Marching alongside workers organisations, pensioners, students and others, the protesters were attacked with of tear gas, water cannon baton carges and other crowd control measures. Our source in France tells us dozens of masked and hooded anarchists clashed with riot police in southern Paris today (Wednesday), burning bins, smashing property and hurling projectiles. The anarchists hijacked a May Day rally that was focused on protesting against President Emmanuel Macron’s policies, and the cost of living increases that have resulted from them.

Tens of thousands of trade union and “yellow vest” protesters were on the streets across France again, days after Macron outlined a response to months of street protests including tax cuts worth around 5 billion euros ($5.6 billion). Macron announced a series of proposals in response to the protesters demands, but many in the grassroots movement, which does not have a leadership structure, have said they do not go far enough and lack detail. The president’s problem is that nobody believes him, previous promises he has made have amounted to no more than creative accounting, moving money from one budget to another.

The increasing involvement of extremists in the protests signal that events are taking a nasty turnm in France and the protests are not likely to end well for anybody.

The founder and former leader of France’s right-wing Front National (FN) party, Mean-Marie Le Pen delivered a May 1 speech at the Place des Pyramides during a rally to honor Jeanne d’Arc. “Let’s have the courage to be nationalists,” he told the crowd, predicting “serious social and political dramas” to come.

Meanwhile in the southern French city of Toulouse, over 1,000 protesters made their way through the streets of La Ville En Rose, however local media has yet to report any violence according to The Local. There was also total media silence in the UK on this story, which should have led most news bulletins.

The yellow vest protests, named after motorists’ high-visibility jackets, began in November over fuel tax increases but have evolved into a sometimes violent revolt against politicians and a government seen as out of touch.

The banners in today’s crowds reflected the anger among some in the movement who feel abandoned by Macron’s economic policies.

The 41-year-old president, a former investment banker, pushed a reform blitz during the first 18 months of his presidency that impressed wealthy business and professional people but infuriated low-paid workers, who feel he favors big business and is indifferent to their struggle to make ends meet.

Another targeted the president directly: “Macron, what have you done to us?”

Thousands of people also demonstrated in cities from Marseille to Bordeaux and Lyon, according to a report from Reuters.

It is becoming obvious that the only way France’s ruling elite, for years even more out of touch with the mood of the public that the political establishments in Britain, Germany and The USA, will solve this crisis is for the President and his government to resign and call a new election.

General Strike brings France To Standstill As Nation Protests Macron Policies
Today, in response to calls by unions and activist groups for a nationwide strike, public workers across the country stayed home on Thursday, immobilizing public transit across the country as the first general strike in more than 20 years began.
The main reason for the walkout was President Emmanuel Macron’s pension reforms (not unlike how a planned – then scrapped – gas tax hike sparked the giles jaunes)…