Authored by Matt Agorist via ActivistPost.com,

The term pedophrasty is a relatively new word – not currently accepted by an official dictionary – but that has a powerful meaning in today’s political and media environment. Pedophrasty is an “argument involving children to prop up a rationalization and make the opponent look like an asshole, as people are defenseless and suspend all skepticism in front of suffering children: nobody has the heart to question the authenticity or source of the reporting. Often done with the aid of pictures.” We have seen this tactic employed by both the left and the right sides of the political spectrum and it is, unfortunately, highly effective. 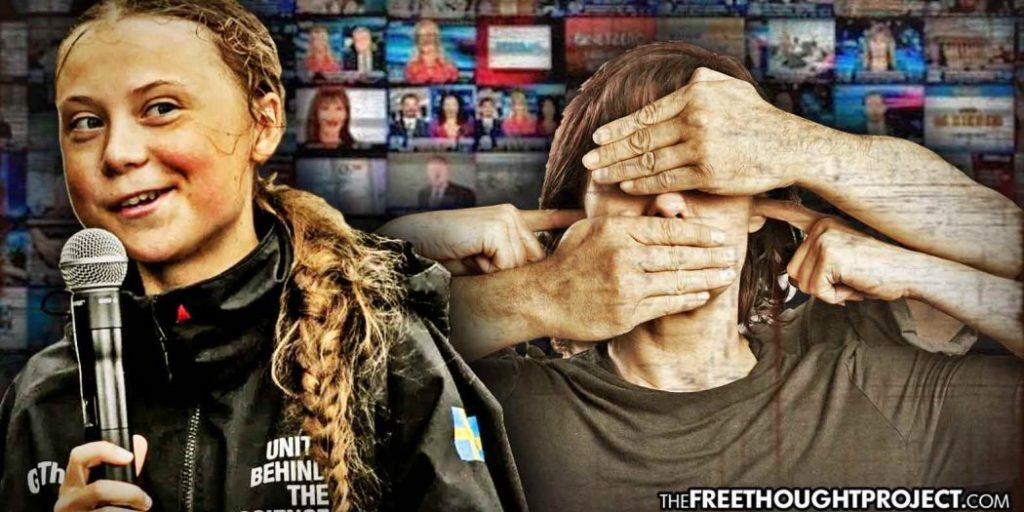 If you turned on your television last week, you likely saw 16-year-old climate activist Greta Thunberg. No one here at the Free Thought Project are climate scientists, so we will abstain from commenting on her agenda. However, neither is she. But I digress. The political and mainstream media machine’s exploitation of Thunberg is a perfect example of pedophrasty.

If Thunberg’s activism actually wakes people up to pollution and incites a peaceful and a voluntarily implemented environmental benefit — without ushering in a tyrannical climate change police state — we fully support her endeavors. Wanting to save the world is a noble cause and if children want to try to do that, by all means, have at it—just don’t take away anyone’s life or liberty in the process.

The subsequent sh*t storm that was sparked online by Thunberg’s coverage — entailing both support and hatred — however, is a different story.

It served as a perfect distraction to things that actually matter in our lives. As videos of Thunberg meeting with Barack Obama went viral (I’ll get to that irony in just a second), extremely important events unfolded around us, which were entirely ignored by the mainstream media.

Before I list these major stories passed over by the media, I would be remiss if I failed to point out the irony of the Obama/Thunberg meeting. Sorry.

Barack Obama advocated for, approved, and oversaw eight wars in various different countries which brought death and destruction to millions of innocent people. Under his watch, tens of thousands of warheads fell all over the Middle East ensuring a lifetime of pollution and suffering for the people who managed not to be blown up by them. What’s more, under his (and yes, Trump’s too) presidency, the US military contributed more pollution to the planet than 140 countries, combined. This has made the United States military the largest polluter on the planet. But, by all means, he fist-bumped Greta, so, all good man.

Back to the point.

FIND OUT which stories Saint Greta kept out of your news

War and Politics Behind Mass Displacement in Africa, Not Climate Change – UCL
A report from a new study conducted by University College London’s may cause a stir in the climate scaremongering industry. The report challenges the academic establishment’s standard narrative of mass displacement in Africa being principally responsible for the creation of refugees in Africa and casts doubt on a number of other assumptions about global problems.

German Scientist Confims Climate Change Ia A Politically Motivated Scam
Even as the inbred idiot Prince Charles was babbling to a hand picked audience about the skid marks in his underpants being caused by Climate Change, a somewhat more scientifically literate person, Dr. Friedrich Karl Ewert, a retired geologist and data computation expert, has confirmed what those of us dubbed ‘climate deniers’ have been telling you for years …

One thought on “Stories The Media Ignored While Worshipping Greta Thunberg”