One quickly tires of Labour Party candidates and their Jew – hating supporters claiming, every time an election is in the offinge, the “The Wicked Conservatiovs plan to sell the NHS to private enterprise. They’ve been at it again throughout the current election cycle, and of course there is no more truth in the claims than there ever was before. But the lefties, as they glefully point at any conservatives whose heads appears over the parapet, “Witches, burn them,” that the Labour government, between 1997 and 2010 under the traitor and war criminal Tony Blair privatised much of the NHS. (Our local super-hospital where my wife was recently murdered by bureaucratic institutionalised incompetence was built by one of Blair’s Private Public Finance initiatives and is now owned by a subsidiary of HSBC, making it, perhaps, an NHSBC hospital.

So those leftie claims that the “evil conservatives” planned to sell off our ‘precious NHS’ qyickly start to look rather empty. And that is before we have considered the detail of Labour’s plans for the NHS.

Labour leader Jeremy Corbyn made the repeated accusation that Boris Johnson’s government, if re-elected with a majority in parliament, will see the NHS to American healthcare companies as part of a free trade deal informally discussed between Johnson and US President Donald Trump. Corbyn and his Stalinist bagman John McDonnell, along with other party figures and left leaning joursnlists in mainstream media continue to repeat this in spite of both men offering assurances that the NHS was not “for sale” and the document Corbyn and his cronies claimed revealled a secret deal containing no evidence that any such deal had been discussed.

Corbyn’s attempts to expose his imaginary Anglo – American conspiracy by producing a 451-page document “proving the NHS is for sale” during a press conference on November 27 were debunked when it was revealed that the NHS was only mentioned four times, with US officials only once asking about the UK position on our ‘health insurance’ system”. The other times the UK Health Servive was mentioned were all in the context of allowing US pharmaceutical companies access to the NHS for their products.

Despite this, the stunt has caused quite a storm, but it can be revealed how Labour were actually the first to float the idea of privatising health services in the UK.

Tony Blair took office in 1997, with the promise of removing “internal markets” in the NHS – the idea that Health Authorities ceased to run their hospitals, but “purchased” care from their own or other authorities hospitals.

However, during his second term, Mr Blair announced his administrations intention to strengthen links with the private sector as part of his plan to “modernise” the NHS. Driving Labour’s planned reforms were factors including the rising costs of medical technology and medicines, the desire to increase standards and “patient choice”, an ageing population, and a desire to control government expenditure.

It was these plans, now more than ten years old, that Corbyn referred to in his docdgy dossier on plans to sell the NHS. 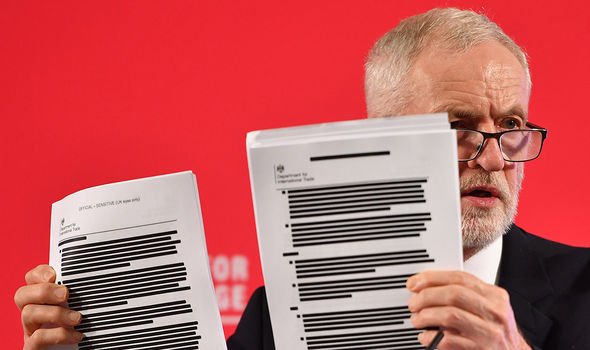 Corbyn’s stunt caused a storm in an eggcup on social media as the usual suspects jumped on the bandwagon to accuse Boris and his party of planning to sell the NHS, but it is widely known that Labour were actually the first to float the idea of privatising health services in the UK, although Margaret Thatcher’s conservative government in the 1980s introduced the idea of an internal market (whatever that means’) to the NHS and also encouraged the outsourceing of certain services such as janitorial duties and waste disposal.

A Labour government under Tony Blair took office in 1997, and quickly introduced the concept of PFI, Private Finance Initiativs (also termed Private – Public partnerships,) the idea that Health Authorities ceased to own their hospitals, but hired them from private companies as a managed facility. Many left wing commentators were horrified and dismissed the idea as a ‘licence to print money’ for the private half of the partnerhip.

In 2006, Blair welcomed 11 private healthcare providers, including private health insurance firm Bupa, into this “NHS family,” in a bid to drive up the quality of services provided. Blair made his and Labour’s intentions clear in 2006 when he said “By 2008 we could have as much as 40 perrcent of acute operations done in the private sector being done under the NHS banner.”

The network’s spokesman, Mark Smith, admitted the changing healthcare market meant the independent sector was increasingly looking to the NHS for business. He said some companies had “specific targets for a large number of patients to be NHS patients in the future because undoubtedly things are changing. Wherever people are treated – in a traditional hospital, an independent hospital, a new treatment centre or in the community – it is the protection afforded to them of tax-funded healthcare, according to need and not ability to pay, which makes them NHS patients.

Nice try at wrigging out of Labour’s committment to privatising the NHS but between 2004 and 2014, demand for NHS services increased rapidly and hospital admissions increased by 32 percent, outpatient attendances by 17 percent, primary care consultations by 25 percent and community care activity by 14 percent. The only way the massive, clumsy, centralised bureaucracy that runs service could cope was by outsourcing more work. Research carried out on behalf of the GMB trade union, which represents many NHS workers, shows 15billion of health service contracts have been handed to private companies since 2015. And yet the service is still failing to cope with increased demand.

NHS Tests And Drugs Do More Harm Than Good