Anyone who is even half awake will know by now that Mayor of London Sadiq Khan told the London Metropolitan Police earlier this year they should in future ignore minor crime and concentrate on stamping out ‘hate crime’. They will also know that since then London has been shocked by a huge increase in violent crimes.

And yet neither Unhappy Richard (Sad Dick, geddit?) nor anyone in national government appears top have a clue how to stop the incompetent, Islamist Mayor Khan turning the city that has been described as ‘the capital of the world’ into a lawless, third world shithole in his first term.

A teenage male received life-threatening injuries after reportedly being disemboweled in a quadruple stabbing in south London on Thursday. The male victims were aged between 15 and 16. Six teenagers have been arrested. Witneses said the boys wrre involved in a gang fight.

A police statement on those injured revealed: “One remains critical, one is in a serious but stable condition and the remaining two did not suffer serious injuries.”

People who saw the fight described how one of the victims cried for help before being stabbed. Another described seeing one boy with his intestines hanging out.

“That particular one, I hope he does live but by the looks of it and the way the ambulance had to struggle I would give little chance,” said the witness. Others described how they saw a group of boys running moments before the police arrived. “Ten minutes before the stabbing I saw a whole heap of youths run down that way.

“Then 10 minutes later I heard people shouting and bawling out the back there. When I looked round the back there, I saw the youth come running from the block. He came to the corner and dropped. He was holding his belly.”

The crime scene, on a Camberwell sink estate, is close to the spot where 23-year-old rapper Sidique Kamara was killed on August 1.

Labour’s Harriet Harman (aka Hattie Harperson because of her ridiculous devotion to politically correct language,) the MP for Camberwell and Peckham, one of the less salubrious areas of South London, said she was extremely concerned by the stabbings and is in contact with police and local councillors.

Supt Annmarie Cowley said: “This incident is in its very early stages and at present we cannot speculate on what the nature of it may be. What we can say for certain is if there needed to be an example of the utter senselessness of knife crime, then this is it.

“Four males are in hospital, and at this stage we cannot say how serious their injuries are. It is beyond comprehension.” 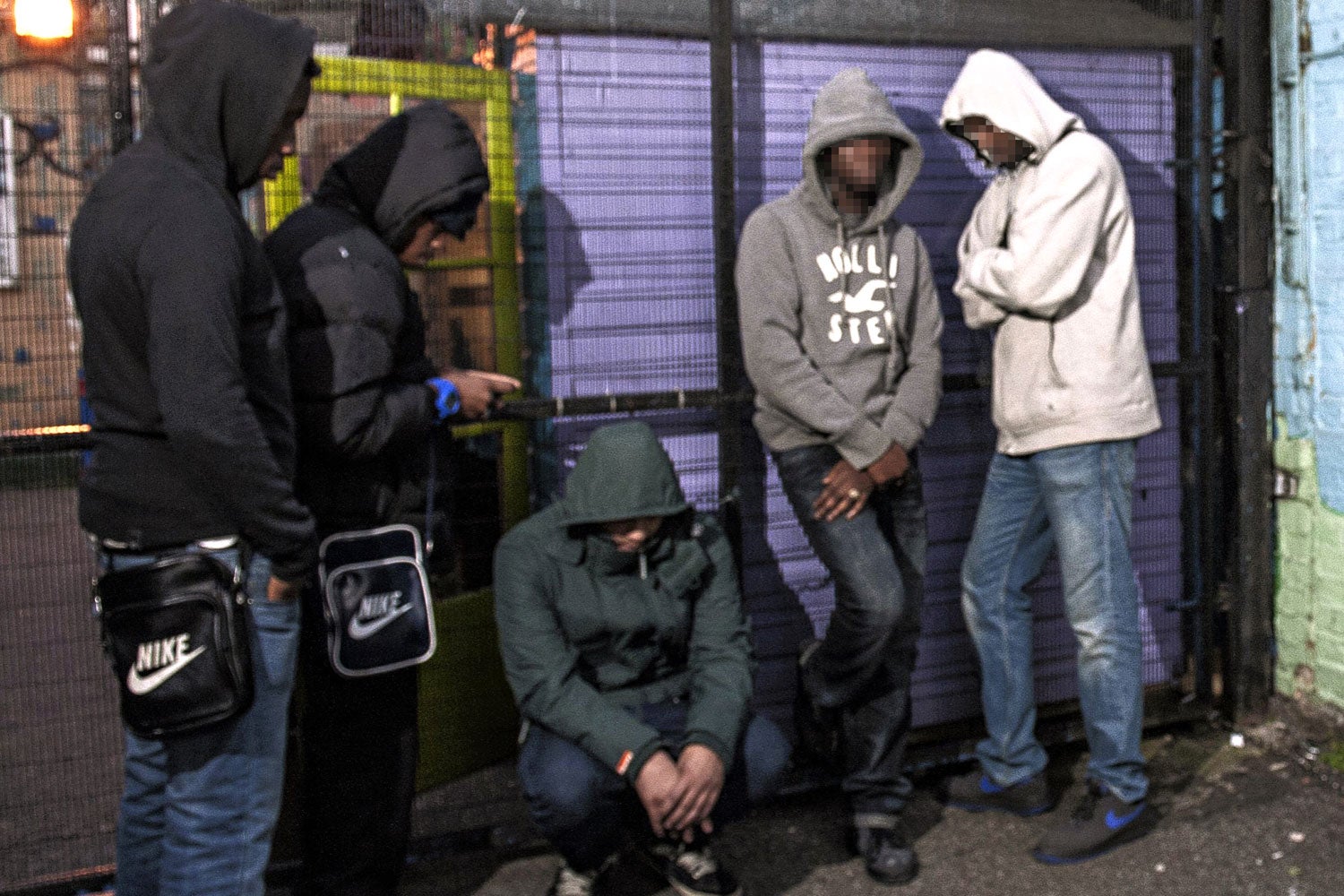 Dealing in drugs and sex to make money is now the main priority for gangs in London who’s “ruthless operating model” runs through the heart of their criminality, and puts them on a par with crime networks that have sprung up in Germany France, Italy, The Netherlands, Belgium, Denmark and Sweden, anywhere in fact that the eU’s open doors immigration policy has led to the formation of immigrant ghettos dominated by single ethnic groups,  a new report reveals.

The report into the gang activity in a North East London borough sheds light on the dark business of drug dealing, social media and sexual exploitation on Britain’s streets. It makes no mention of other grand ‘industries’, extortion, the trade in illegal weapons, manufacture of fake credit cards and people trafficking.

“The gangs at the moment are much more about making money and they will use violence to get what they want,” From Postcodes to Profit, How gangs have changed in Waltham Forest report states. Postcodes is a reference to the way British towns and cities define districts.

Gangs have refocused on organised crime, moving from defending their so-called ‘ends’, territories defined by postcodes, to viewing their territory as a marketplace where hard cash can be made by selling crack, cocaine and cannabis as older criminals have replaced the teenagers as leaders. This territory must be protected at all costs and if members of another gang encroach the retribution is likely to be swift and deadly.

In the recent crime wave that is sweeping London since mayor Sadiq Khan announced the police would prioritise pursuing people for ‘hate crime’ rather than investigating real crime, both gang related gun and knife crimes have increased exponentially and acid attacks, once a rarity, are an everyday occurrence.

So much for multiculturalism and diversity.

Scene 1: The police station in Midsomer Ghettobury. Sergeant Warren from This Life rushes in gasping for breath.

Sergeant Warren from This Life:
Sir, it’s all kicking off (puff, pant) the lawn croquet club in Badgers Arse. (gasp, snort) The Bsadger’s Arse massive found guys from the Corpsechester Warrior Tribe pushing cucumber sandwiches on their turf. There has been (huff,puff, ourrrrrp) gunplay.

Inspector Barmyby:
Oh no, I knew it was a mistake to put ethnic minorities in the script. We’ve gone from Agatha Christie to Quentin Tarantino. Better get down there I suppose.

Scence 2: Inspector Barmyby and Sergeant Warren from This Life pootle along the leafy lanes towards Bager’s Arse. Rounding a sharp bend they see a full scale gand war being fought on the village green. Blues and twos going the police officer drive carefully into a parking space as a young Asian man plants an axe in a black youth’s head.

A passing nosey bugger looks at the car Sergeant Warren from This Life has just parked.

Nosey Bugger:
Don’t they teach you policemen to drive these days. Look, your front bumber is an inch over the line.

Inspector Barmyby:
Sorry but we’re in a rush, we have to stop that lot killing each other.

Nosey Bugger:
Let them get on with it I say. Do you know what’s happened to property prices round here since they put that lot in the script. Now park that car properly before the locals get angry, people have been killed for less in Midsomer.

Sergeant Warren from This Life:
Sory Sir, I’ll repark as soon as I’ve arrested the vicar.

Inspector Barmyby:
The vicar? Why the vicar Sergeant Warren from This Life?

Sergeant Warren from This Life:
It’s always the vicar what done it Sir. Besides he’s the only one who isn’t heavily armed.

Scene 3:
One of the gang members breaks away from the melee and points at the police officrs.

Inspector Barmyby (approaching at a waffer trot):
Yes, it’s the Baby lotion or whatever. Come on, break it up here. Who are you people anyway, what are you doing in Badger’s Arse?

Gang members surround Barmyby and Sergeant Warren from This Life. A thug confronts the younger policeman.

Thug:
Hey I know you. You’re name’s Ben, we were on the same drama course at Uni.

Sergeant Warren from This Life:
In character dickhead, the cameras are running.

Inspector Barmyby:
Come on, I want to know what you are doing here.

Gang member:
Where else are young ethnic minority actors going to get any work these days. We all used to be crowd scene actors in The Bill. Innit?