Alan Sugar (one of Blair’s dodgy ‘lords’ and front man of the UK version of ‘The Apprentice’ TV show, has come in for a shitstorm of criticism online after tweeting a typical market traders gag  about the Senegal World Cup team.

Sugar posted a photoshopped image of the Senegal players standing over a row fake designer  sunglasses and handbags and gave it the caption “I recognise some of these guys from the beach in Marbella. Multi-tasking resourceful chaps.” The line is a reference to immigrant street-traders who harass tourists with highly aggressive sales pitches around Marbella and other resort towns on southern Spain’s Costa del Sol. 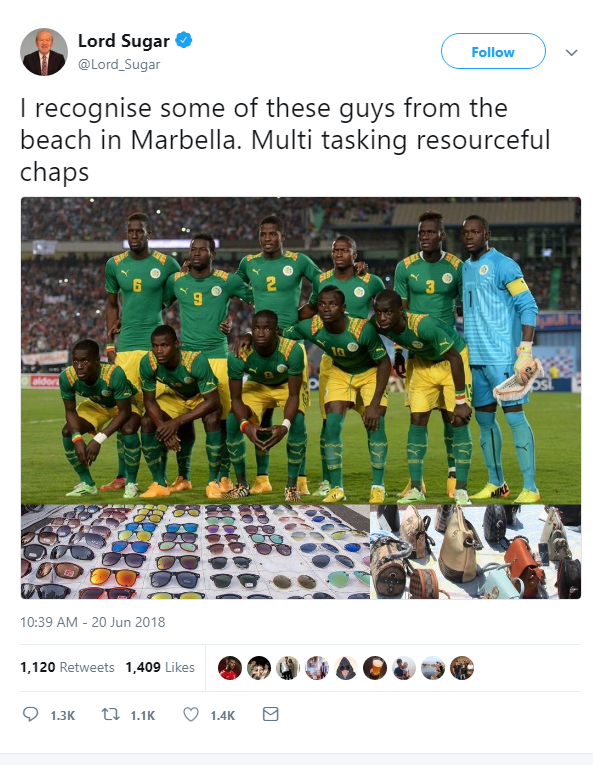 The post was deleted when university brainwashed lefties started screaming ‘waycist’, but like a true cockney geezer Sugar was unrepentant, responding: “I think it’s funny. But I will pull it down if you insist.”

It’s well known of course that sugar started out as a market trader, an occupation I mad my living at for several years during my mis – spent youth. To me his quip was typical of market trader’s banter, of the kind I still hear when I go up to see my brother who still works a few markets in the north west. Politically incorrect? yes; funny? yes; racist? no!

Maybe these lefty snowflakes should be made to spend a year working as market traders … but no, to expose useless, the self righteous little fucks to the realities of life at the sharp end would just be cruelty.

White Privilege Now Inculdes The Privilege Of Being Fired For being White
Its should be obvious by now that the politically correct left, insaniac sociopaths that they are, have only one emotion at their disposal; hate. Bizarrely the hatered of these predominantly white, middle class people, while of themselves, is mostly racist in nature but directed at members of their own race.

Ten Truths You Can’t Tell In Britain Without Being Accused Of Racism.
by Arthur Foxake The screenshot below is from an article written by Trevor Phillips, former head of the Equalities and Human Rights commission for The Daily Mail (or Mail On Sunday) Trevor Philips home truths on racism. Image source Finally, we?re having that open and honest debate about immigration and race everyone has been calling … Continue reading

Politician Blasts Conviction For Speaking The Truth On Anti-Semitism In Europe
A Danish politician has been reprimanded for posting comments on Twitter about the resurgence of anti semitism in Europe. Apparently while hand wringing and breast beating about violent attacks on Jewish people is fine, stating the obvious by linking the Europe migrant crisis to this new wave of anti Semitism is a criminal offence …

Racist Student Union Officer says ‘I Can’t be Racist’
We have often made points about the hypocroisy of the left, but a Student Union diversity officer from London beats all comers. Having tweeted ‘kill all white men’ she justifies herself by saying that as an ethnic minority woman she cannot be racist or bigoted.

If a black person acts like a twat is it racist to say he’s a twat.
Examples of US rapper Kayne West behaving in ways that show what a cupid stunt he is occur to frequently for mainstream media to report them any more it seems. Or maybe it’s just that because Kayne is an African American those mainstream journos were afraid of being called racist if they report his latest fuckwittery.

The British Jihad, Islamism And The Curse Of Multiculturalism.
As the world recoils in horror at images posted on the internet of an American journalist being cruelly and brutally beheaded by an (allegedly) British terrorist fighting for the extremists of the Islamic State in northern Iraq, we ask is the left wing folly of multiculturalism coming home to roost.

Shock; horror. Human Barbie Doll has her own opinions
The human Barbie girl Valeria Lukyanova has become something of an online phenomenon and is regarded as a sex symbol by many young men of the kind who have more computers than friends. Personally I find her apearance bizarre and about as sexually alluring as cold porridge. Still each to there own, where would we be without diversity of opinion.

The Children From Hell
Children are like farts, your own aren’t so bad but anyone else’s are horrible.” How many times has that been said by people in my age group I wonder.

A Couple of Smiles Before It Gets Even More Painful
Almost at the end of a month of bad and sad news; Iraq, Afghanistan, the Financial Markets, the environment and the death of Desert Orchid being just a few topics, its nice to hear something jolly.

A Seasonal Miracle
South African Mr. (got that, Mr.) Charles Sibindana has been fined ZA$140 for making a fraudulent claim for sick pay.
Mr. Sibindana submitted a certificate from his wife’s gynaecologist to back up … >

The Lazy Pupil’s Examination Aid.
In my school days, admittedly more years ago than I care to remember, trying to justify the non – delivery of homework projects with the excuse “please Sir, the dog ate it,” was not exactly fresh and original but [ … ] Now of course, in an era of mass communication and advanced technology it is a tired and lame excuse used as a last resort only by the terminally dull – witted. Family pets have advanced in status so much they can actually make a positive contribution to academic achievement …

Personal Irritation Claims – Professional claims service
OMFG, we’ve had about ten calls yesterday and today about personal injury claims, mis – selling, unfair treatment at work, medical negligence, you name is, a bunch of shyster lawyers want to sue someone on your behalf for it.

Evolution: Theory, Fact or Fiasco?
Much as I have faith in Charles Darwin’s Theory Of Evolution as a feasible explanation of how diverse species originate (The Origin Of The Species) it annoys me when science fans insist “Evolution is not a theory, its a fact.” Especially annoying of course is when they cite evolution to explain the origin of life on earth or the development of human intelligence. Even more annoying is their assumption that anyone questioning them is a young Earth creationist. Here are a few thoughts on some of evolution theory’s inconsistencies …

You Know You Live In A Country Run By Idiots If …
We all know our countries are run by idiots, but how do we prove it? One way is to observe someone and record how many times they do something that will undo something else they just did. Here are some examples:

Labour’s bacon Sandwich Fail Shows They Are Unfit To Govern
Some people might think Boggart Blog has the same style of rabid hatred for all Labour politicians and Labour supporters and lefties reserve for Michael Gove. [ … ] Take for your example the infamous bacon sandwich incident on the day before the European elections. Warned that Labour were losing votes to UKIP because working class people felt the party was elitist and out of touch, some out of touch elitist in the Labour Public Relations team decided Ed, who is not religious but is Jewish all the same, should be pictured eating a working class breakfast, a bacon sandwich.