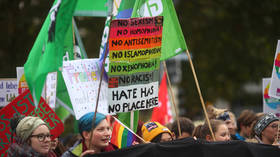 Far left activists, motivate by hatred of anyone who disagrees with them, campaign against ‘hate speech’ (that’s free speech to you and me.)

Massachusetts Democrat Daniel Hunt’s bill to ban the “b-word,” fining offenders $150 on the first offense and $200 or six months in prison if they can’t stop saying it, sounds like the kind of joke conservatives might make to poke fun at the uber-liberal Bay State. But the bill – titled ‘An act regarding the use of offensive words’ – is real. Worse, any witness to the use of the word can complain.

The Boggart Bloggers are quite sure the draconian penalties this liberal arse wants to impose on people who use the term ‘bitch’ will not be applies to ‘musicians’ of a certain skin tone and ersatz culture whose lyrics seem to feature the offending term every fourth word. We also feel safe in asuming that when a person of European ancestry is accused of using the forbidden word, simply being accused will be considered sufficient proof of guilt.

Far left ‘liberals’ and progressives have long been set on a course to take us back to the kind of justiced last meted out by the courts of The Holy Inquisition in their medieval witch hunts.

“We are especially concerned that the Department has yet to intervene in this matter where a mother is using alleged medical professionals to fundamentally alter her son’s physiology,” said Jeffrey Mateer, the first assistant Attorney General. He continued:

The children at the center of this dispute are in immediate and irrevocable danger. We ask that you open an investigation this matter as soon as possible and act pursuant to your emergency powers to protect the boy in question [from] permanent and potentially irreversible harm by his mother.

The letter spotlighted the broader childcare problems raised by the claim that children can be converted into members of the opposite sex by medical interventions such as pills, hormones, and surgery.  READ THE FULL STORY

A Few Harsh Facts About Feminism

RECOMMENDED READING for people who enjoy posts like this