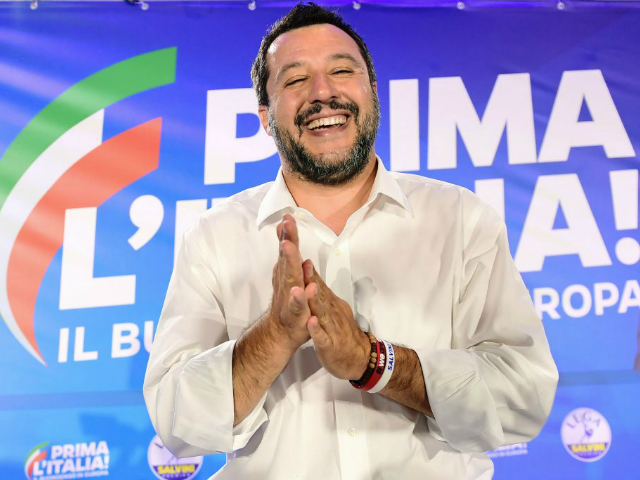 As Italy’s left – of – centre coalition government, which lost its majority in the national assembly, and with it the ability to govern the European Union’s third largest, and probably most volatile member state, the Lega party, led by the biggest thorn in the EU’s side, Matteo Salvini, has lengthened its lead over the largest party in the government, according to  the latest national opinion poll on the state of Italian politics, rising to 27 percent, while its main rival the Democratic Party (PD) dropped to below 20 percent.

The progressive PD, captained by Nicola Zingaretti, dropped ,  to 19.5 percent, while the left of centre Eurosceptic party Five-Star Movement, likely to be wiped out in forthcoming elections because of the way they sold out to Brussels and joined a coalition of Eurofederalist parties after their partnership with Legal broke up, rose slightly to 16 percent . To the right of Italian politics, likely coalition partners for Lega, Giorgia Meloni’s Fratelli d’Italia (FDI – Brothers of Italy) dropped to 13.9 percent and Silvio Berlusconi’s Forza Italia party fell to 6 percent.

Matteo Renzi’s Italia Viva party saw a 0.3 increase, bringing the fledgling group up to 3 percent but are unlikely to make a significant impact in an election.

According to another survey, by the Istituto Noto, Italians feel growing mistrust towards the government, mainly because of the economic, political, and social measures implemented during the health emergency. The overall approval rating for the Prime Minister Giuseppe Conte’s coalition has fallen dramatically to 36 percent and protesters around the country, complaining about the economic damage caused by Conte’s stringent lockdown measures have called for his resignation.

As mistrust toward the national government has increased, Italians are expressing a growing appreciation of their regional governments, and talking about decentralisation the survey found.

As Breitbart reported, Italians are at the end of their tether with delays in lifting restrictions after a draconian lockdown that crippled the Italian economy and left millions of Italians with no income at all.

A government survey of Italians found anger at the current government the predominant emotion since the lockdowns began in early March. As Italians feel more confident  that the COVI|D 19 virus poses no great threat to the vast majority of people. Government minister have admitted that over 90% of Italians who died in the epidemic were over 70 years of age and 99% had ongoing health problems. Anger is also rising over the apparent inability of government to restore normal conditions and kickstart the economy.

Salvini Accuses Leftist Govt of Giving Away Italian Sovereignty to EUMatteo Salvini leader of the hugely popular Populist League (Lega) party, which, despite having a democratic mandate, was excluded from the government of Italy by a stitch up enigineered by the Euronazi EU Commission in Brussels, has accused Giuseppe Conte the Italian prime minister apponted by the EU, of handing over Italian sovereignty to the European Union bureaucrats

EU’s Top Eurofederalist admits EU wants an empire
The leader of the Alliance of Liberals and Democrats in Europe (ALDE) told CNN that plans to reform the EU and devolve power from Brussels back to the nation-state proposed by the populist paries that have spring up in member states, and led by Matteo Salvin’s Lega (League) in Italy, Marine le Pen and her Rassemblement National in France and Hungary’s Victor Orban, leader of the Fidesz party would mean that the bloc “will die inside.”

Donald Tusk, who is the President of the European Council and was the centre-right Europhile Prime Minister of Poland from 2007 to 2014 made the remarks in support of his former Deputy Prime Minister, Anglo-Pole Jan-Vincent Rostowski who is standing as a Change UK candidate in London for Thursday’s election.

EU Dictatorship: German MEP says process of choosing Juncker successor a hoax as European elections near
The process of selecting the person who will succeed Jean-Cluade Juncker as European Commission President is a deeply flawed “hoax” dreamed up by “Eurofanatics” who want to create a United States of Europe, a German MEP said today. Hans-Olaf Henkel made his remarks as the prospective candidates – known as Spitzenkandidaten, in Germany, jockeyed for position.

Catalogue of Greenteth posts on Italy

Europe’s Nationalists Unite Behind Salvini Ahead Of EU Elections

With the EU elections due in May this year expected to deliver another body blow to the dream of a Federal European superstate, Europe’s more conservative nationalist parties have today announced an alliance that is aiming to become the strongest group in the European Parliament, with a view to forcing to radical reform on the EU bureaucracy in Brussels, which dictates policy on security, migration, family and the environment, according to Euro News.

Harold MacMillan’s EU warning revealed
Harold MacMillan, British Prime Minister from 1957 to 1963 gave us a chilling warning about the EEC – (European Economic Community) – before Britain joined the bloc, claiming that Germany had planned on using the trading bloc, as an instrument to assert its supremacy across the continent once more. On Wednesday, 3 April, 2019 The House of Commons voted in favour of legislation which forces the Government to request another extension for ‘Brexit’, giving our current Prime Minister Theresa May more time to show us the comtempt the ruling elite have for the principles of democracy.

Leaked Document Reveals Unacceptable Demands Made By EU Ahead Of Final Talks Before Brexit Deadline
A Secret document has revealed concession the EU is demanding before beginning fresh talks on Brexit ahead of the 12 april dealine. According to a memo seen by the Sunday Times, Brussels is demanding the UK must continue to pay its share of the EU budget, must implement new measures on citizens’ rights, and sign a legally binding agreement to arrangements to avoid a hard border between Northern Ireland and The Republic.

Merkel: EU Members Must Cede control Of Their Border To Brussels
German Chanellor Angela Merkel sparked outrage today and pushed the EU cloers to its final disintegration when she stated that EU Member states would be forced to surrender on of their most important sovereign powers, control of their borders, to Brussels in order that the unelected bureaucrats of the European commission could ‘manage’ immigration (i.e. open the border crossings and let any criminally inclined bunch of fanatics enter Europe.

We predicted last year when the socialist leader Pedto Sancjez usurped the Spanish government after the collapse of the minority government led by Mariano Rajoy collapsed, could not last. In a widely expected but destabilizing development, Spanish conservatives and pro-independence Catalonians voted to back a slate of amendments to a government budget on Wednesday by a wide margin of 191 votes out of 350,

EU Stitch Up To Promote Euronazi Selmayr’s Is Typical Of The EU’s Contempt For Democracy
#
The former Prime Minister of little Luxembourg Jean-Claude Juncker to ensure his chief of staff was installed as the new Secretary-General of the European Commission, in what one senior Eurocrat has called “an impeccably prepared and audacious power-grab” at the top of the European Union.

Germany Threatens Sanctions Against Poland Over ‘Lack of Western Values’ (for Western read German)
Last year, Poland’s conservative nationalist Law and Justice party (PiS), led by former Prime Minister Jaroslaw Kaczynski, captured both the presidency and parliament at elections in May and November. Since taking office, the party’s lawmakers have used their parliamentary majority to initiate a series of controversial legal reforms, causing concerns both at home and abroad, specifically in Brussels and in Berlin.

Europe’s Bank Crisis Arrives In Germany: €29 Billion Bremen Landesbank On The Verge Of Failure
… yesterday we observed a surprising development involving Deutsche Bank, namely the bank’s decision to quietly liquidate some of its shipping loans. Reuters reported, “Deutsche Bank is looking to sell at least $1 billion of shipping loans [a market sector] whose lenders face closer scrutiny from the European Central Bank.

BREXIT vs. GREXIT – The Truth About The European Union And How It Treats Members
The only thing that will halt the European Union in its tracks, stop the push beyond Europe’s geographical borders and prevent EU expansion to incorporate Asian, middle eastern and north African nations is war. Unless the testicularly deficient politicians stand up to the bean counters of Brussels. That’s what they are, bean counters; not one among them is a risk taker or a person who has advanced because of their willingness to put their arse on the line.