A left wing council in the UK has removed two flags raised to prote International Womens Day because they were deemed “transphobic” after someone claimed they carried an offensive message by displaying the dictionary definition of the word ‘woman’. 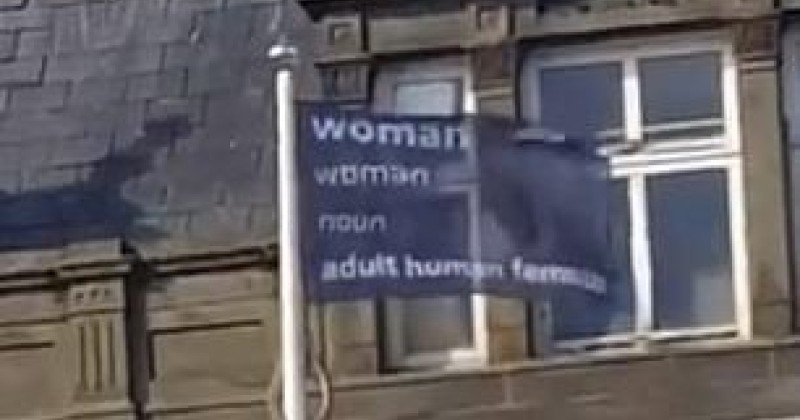 You couldn’t make this stuff up, could you?

The flags, flown outside Bootle & Southport town halls in the Metropolitan County of Merseyside, were a celebration if International Women’s Day.

They featured the word “woman” and the dictionary definition: “an adult human female.”

However, a Twitter user called Adrian Harrop complained that the flags were a “transphobic dog whistle,” the offending items were removed. Progressives are very fond of dog – whistles

“We have been made aware of a potential issue regarding the messaging on a flag flown at Bootle & Southport town halls and have taken them down,” tweeted Sefton Council’ piblic relations department, “We have a proud history of supporting LGBTQ+ rights across the borough,we continue to support all members of our communities.”

So Sefton Council is stating here that the word “woman” and its dictionary definition are now offensive, and posssibly constitute a “hate crime”. This isn’t a joke. You can verify the facts of the story at this BBC News page or HERE or HERE. I’m not exaggerating that “woman” is now a dirty word because it is offensive to chicks-with-dicks who claims that creatues with penises and testes can be women while creatures with vaginas and ovaries can be men in any way. This is literally what Sefton Council are saying in their statement justifying this insanity. Just take another look at that flag:

One Twitter user raged: “This was the offensive flag. Seriously, absorb this. They took these flags down because they were seen as OFFENSIVE. This isn’t something happening on social media. This shit is happening in REAL LIFE and it’s fucking BIZARRE,” she added.

She then pointed out the irony of a flag meant to honor International Women’s Day being removed because a man complained.

Presumably, from now on the word ‘woman will be deemed so offensive every dictionary that includes a proper definition of the word will have to be reprinted with every instance of “woman” being replaced by a more trans- friendly term, and all the old copies containg the offensive word burned.

In George Orwell’s 1984, the Newspeak dictionary shrank in size year after year in order to limit the scope of language to express ideas and so consrtict thought and free speech, making it harder for the plebs to vocalize their opposition to The Party.

That’s progress! Orwell’s book was fiction, but we have plenty of examples, from The Soviet Union and Communist China to Cuba, Venezuela, East Germany, Poland and latelty even the so – called liberal democracies of the European Union, to convince us that the authoritarian tyranny of bureaucratic dictatorship is where socialism will always lead.

Criminal damage in Cambridge reveals the police soft peddaling on Extinction Rebellion crimes
Nobody is allowed to walk on the grass outside Trinity College Cambridge. I suppose an exception might be made if you were a 365-year-old don who once lolled under the famous apple tree with Sir Isaac Newton (probably a couple of those old fellows still holed up in the port cellar).

SNP: Scottish Nazi Party?
Do you really want a bunch of creepy authoritarians like this pulling Ed Miliband’s strings in a Labour – SNP power sharing deal?

Millie Tant, Tatchell’s Transphobia and Germain Greer’s Big Hairy Smelly Vagina
The well of hypocrisy from which the left, champions of freedom, democracy, equality and free speech in their own estimation, draw their dishonest, self rightoeus views on the world is bottomless, it will never run dry. How else could it have continued to flow during this latest two-faced display of authoritarianism from the lovers of all minoities even when those minoritites hate each other. It is the multual hatred of minorities however that is fragmenting the left.

Tony Benn’s inheritance tax dodge – another leftie hyocrite exposed
Remember the patron saint of loony lefties, Saint Anthony of Wedgewood – Benn, previously known as Viscount Stansgate? Agreeable sort of bloke, pip smokers, great speaker, utterly daft opinions as one would expect from an aristocrat who is so deluded he thinks he understands the working class?

The Left’s Rhetorical Technique Explained
In the first of what might become a long if irregular series of posts with the collective title, “Left Wing Authoritarianism for beginners,” your friend and mentor Little Nicky Nicky Machiavelli will expose the origins of the socialist left’s propaganda technique and its apparent dependence on slogans, dogma and mantras. But first let’s play a little game …

Nato heads of state will meet in Newport, Wales, to discuss the alliance’s future.
This won’t be a standard summit. Nato is in crisis. Faced with an increasingly unstable situation in Ukraine where the neo – Nazi government installed by the USA / NATO and the EU gets loonier by the day, NATO, The North Atlantic Treaty Organisation is being presented by mainstream media as in need of a new strategy to deal with what’s described as increasing Russian aggression in eastern Europe. This is in addition to their needing a new strategy to deal with the threat of the Islamic State in Iraq and Syria.

Transgenderism and The Left’s Stuggle Against Reality

‘People with penises are men’ – Lit Fic author Ian McEwan takes on The Politically Correct Though Police in the transgender debate. The much acclaimed and highly  respected British author was today facing calls to apologise to those precious little chick-with-dicks like Caitlyn Bruce Jenner after taking a sledgehammer to the politically correct left’s cause … END_OF_DOCUMENT_TOKEN_TO_BE_REPLACED

Jew hating Leftie Students Union In New Anti-Semitism Row
Those anti Semites of the The National Union of Students (NUS) are at it again. [ … ] Hypocrisy and double standards are the stock in trade of the ‘new left’ of course and the anti – Semitism of Labour voters and other younger lefties (University dumbed down airheads who are too historically illiterate to be aware of the role Britain’s Jewish communities played in establishing the Labour Party
Corbyn’s Politically Correct Hypocrites Hate Sexism But Approve Of Muslim Sexism
On encountering my insense dislike of the Labour Party, people asume I am a Conservative. WRONG! I have never supported The Conservatives and have never voted either Conservative or Labour in my life. Politicians should never be trusted, I but what sets Labour politicians and activists above the rest in terms of being worthy of only contempt is the hypocrisy.

Politically Unbiased BBC Launches Left Wing Attack On Donald Trump For Illegal Immigrants Stance
The BBC, Britain’s publicly funded broadcaster is bound by a charter which commits it to be balanced and non partisan in its news reporting. Repeatedly however, the BBC, its management now doniated by left wing luvvies is becoming more and more blatantly left wing in its unbiased reporting

Labour Scourge Of Tax Avoiders Is A Tax Dodger? WTF is going on?
We have often made points about the hypocroisy of the left, particularly those lefties, but surely Margaret Hodge (nee Oppenheim – the diamond people) is the undisputed champ of left wing hypocrites. As a senior Labour MP Margaret was always eager to condemn tax avoidance. Unfortunately like most self righteous Labour millionaires she did not practice what she preached.

Britain’s Racist Future:Labour Set To Throw Selection On Merit Out The Window
With four weeks to go until a General Election that could change the face of Britain forever, the Labour Party, which hopes to be elected to govern this great and proud nation, has unveiled a set of policies that would make minorities into privileged castes and relegate the white Working and middle classes to the status of second class citizens.

Once We Respected Red Cross Because The Did Good Work. Now They Promote Politically Correct Tyranny.
The cancer of politically correct thinking has spread throughout British public life. Probably the most perfect illustration of how out of touch the new elite, the Meritocracy (who only merit a kick up the arse) have become with the lives of ordinary people is the politicisation of the institutions of government, local government, education, the law and now even the charity sector. Read what happened to a charity worker who dared to have his own opinion on a gay rights issue